My poem "Emily Carr’s Zunoqua of the Cat Village, 1931" was nominated for Best of the Net by OyeDrum.

My poem “Playing for the Lost,” inspired by Kees Van Dengen’s 1920 painting The Violinist, was published in Volume 7.2, Winter 2022 issue of Sheila-Na-Gig online.

My poem inspired by Frida Kahlo’s 1949 painting titled “The Love Embrace of the Universe” was published in the journal Persimmon Tree.

My poem inspired by Remedios Varo’s 1948 painting “The Flautist” was published in The Ekphrastic Review.

My poem, “Calving at Glacier Bay,” appeared in the ONE GOOD MEMORY Series of Silver Birch Press. It was originally published in my chapbook, Inner Passage (Red Bird Chapbooks) and my collection Swim Your Way Back (Dos Madres Press).

My poem “Shadow Travel” was included in The Ekphrastic Review challenge to write about Salvador Dali’s 1931 painting “The Persistence of Memory,” 1931.

Posted by Karen George at 1:09 PM No comments:

I’m over the moon to announce that I won the Rosemary Daniell Fiction Prize. Minerva Rising Press will be publishing my short story collection, How We Fracture, in Spring 2023. 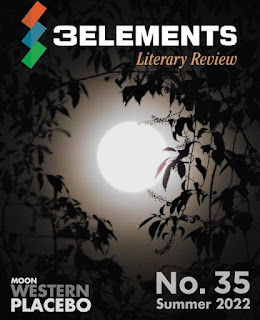 Happy to have my photo titled "Tree-Cradled Moon" on the cover of the latest issue of 3Elements Literary Review.
Posted by Karen George at 7:43 AM No comments:

An excerpt from my novel-in-progress was longlisted for the 2021 Novel Excerpt Contest at The Masters Review.

An erasure poem of a page in Nathaniel Hawthorne’s story “Circe’s Palace,” part of his collection “Tanglewood Tales” at Heron Tree.

Posted by Karen George at 7:59 AM No comments:

A found poem created from “The Dragon’s Teeth,” a story in Nathaniel Hawthorne’s Tanglewood Tales appeared in Heron Tree.

Halfway Down the Stairs

Posted by Karen George at 10:25 AM No comments:

A short story “Palindromes” was published in NonBinary Review’s “Person of Interest” Issue. The story was also chosen for an episode of their Alphanumeric podcast at:  Zoetic Press

A flash fiction piece, “Our Own May Crowning,” appeared in Persimmon Tree

A non-fiction piece, “What I can’t Finish,” in the Fall/Winter issue of Existere: Journal of Arts & Literature

Posted by Karen George at 9:53 AM No comments: 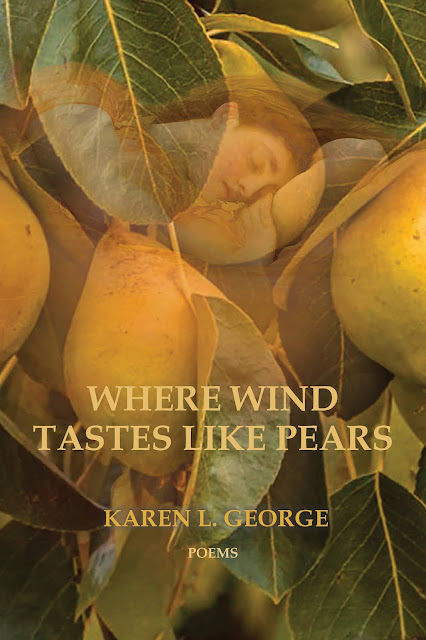 My third poetry collection, Where Wind Tastes Like Pears, was released August 13, 2021. It is available at: Dos Madres Press. The poems are meditations on imagination, memory, wildness, and wonder, how we connect and transform, seen through the fertile landscape of dreams. Below are the blurbs:

“Where Wind Tastes Like Pears is a unique and moving collection that nudges the world of poetry ever closer to its true self, where words create their own meanings, sing their own songs.  In a series of “found” poems, Karen George takes you on a wild, supernatural journey to find your alternate self—that person you may recognize only in your dreams.  In her dreamscapes, objects become animated, and people come back from the dead.  She takes you to that place where a mountain may propose to the moon, or where  a mother and a child “speak in a secret language/that sounds like a lark’s radiance.”  Read these poems and you, too, may awaken to a world ‘buttered with wonder.’” – Cathryn Essinger, Apricot and the Moon

“The poems in Karen George’s Where Wind Taste Like Pears create little universes, complete unto themselves, where anything can happen. You might “come back from the dead/covered in lilies cupping light” or discover  that “a scarf of live salamanders lines a door/only your voice will unlock.” George weaves her poems with such assurance, we willingly surrender to their unfolding visions.  Most of the poems in this collection are “found” poems – assemblages of language gleaned from poets and novelists, essayists, and scientists. Their effect is at once intimate and impersonal, as if spoken by a voice loosed from personality. The poems in this wise and vivid collection speak to the heart of our deep need to dream, our hunger for poems to shelter dreaming.” – Leatha Kendrick, And Luckier

Posted by Karen George at 7:58 AM No comments:

I was a finalist in The Women Artists Ekphrastic Contest held by THE EKPHRASTIC REVIEW. My poem was inspired by Rosa Bonheur’s painting titled “Changing Pastures,” 1863. 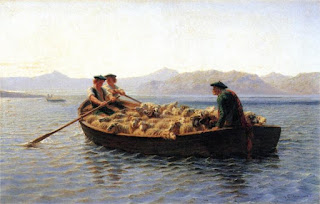 Cool early summer afternoon on the channel, brisk wind not ideal for keeping a flock of thirty calm in a rocking boat. Between bleats of packed lambs and cries of kittiwakes nesting on chalky cliffs, my ears throb. The stink of sour ale wafts from the rowing mate, mixed with the gamy musk of hot, wet wool coats, queasies my stomach.

I take shallow breaths, concentrate on sun silvering blue-green water in the distance, not the sharp peaks of dizzying waves alongside us. Iridescent moss mantles the valleys. I imagine the crimson clover, ox-eye daisy, and buttercup I saw when last visiting with my love, Elise.

The sun soothes my arms, back, neck, matches the warmth of the ewe’s rhythmic heave against my shins.

My arms ease into the cadence of tandem oaring. The white-haired sheepherder at the bow launches into a rousing sea shanty about a drunken sailor. My oarsman groans. When I inhale to join the song, I taste the water’s whiff—elemental, briny-sweet, wild.

The following four poems were published in WRITING IN A WOMAN’S VOICE:  The Call by Remedios Varo, 1961, Fledgling, Frida Kahlo, Self Portrait with Necklace of Thorns and Hummingbird, 1940, & Georgia O'Keeffe's It Was Red and Pink, 1959. The poems inspired by artwork have a link below that will show you that particular work of art.

Posted by Karen George at 7:11 AM No comments: