Review of Jeremy Paden's "Under the Ocelot Sun" 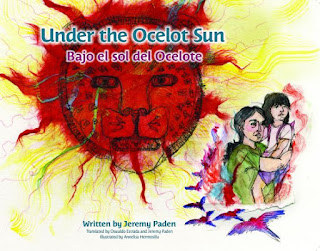 Under the Ocelot Sun

JEREMY PADEN (Author) was raised in Nicaragua, Costa Rica, and the Dominican Republic. He is a poet, translator, and professor of Latin American literature at Transylvania University in Lexington, Kentucky. He is the author of three collections of poems. Among these, ruina montium, about the 2010 Chilean mine collapse, has been published in both English (Broadstone Books, 2016) and Spanish (Valparaíso, 2018). He is also the translator for various poets from Argentina, Chile, Colombia, and Spain.

ANNE HERMOSILLA (Illustrator) was raised in Panama City, Panama, and moved to the United States to study art at Transylvania University. She currently lives in Virginia and is a promising artist at the beginning of her career. This is her first picture book. You can find more of her art at www.annelisadoestheart.com.

OSWALDO ESTRADA (Translator) was raised in Lima, Peru, until his family moved to the United States when he was a teenager. He is a fiction writer, essayist, and professor of Latin American literature at the University of North Carolina at Chapel Hill, and he has authored and edited several books of Latin American literary and cultural criticism. He is also the author of a children’s book, El secreto de los trenes (Universidad Autónoma Metropolitana, 2018), and a collection of short stories, Luces de emergencia (Valparaíso, 2019).

Under the Ocelot Sun is a lyrical, powerful story told in verse by a mother to her young daughter as they wait at the U.S. border to hopefully gain entry after their prolonged, difficult journey from Honduras. It’s a picture book both in English and Spanish, the words and emotions enhanced so beautifully by the watercolor illustrations of Anne Hermosilla. I don’t know Spanish, but I enjoyed seeing the Spanish words in rose colored ink, and I imagined how musical they sounded, translated below each set of English verses in blue ink. In an essay Paden wrote for Spalding University School of Creative and Professional Writing, where he is a faculty member, he describes how he made two different translations of the English verses, then collaborated with Oswaldo Estrada to arrive at the final translation. Though the book might be intended primarily for a younger audience, I found it not only timely, but compelling and breathtakingly haunting. I knew as soon as I saw the dedication page that read “For all those who dream of a better life in a new land” alongside an illustrations of two corn stalks crowned with blue and pink handprints blossoming like flowers, that I would be deeply affected by this book.

The first verse begins with the words, “We are people of the corn, mija,” beneath an intriguing illustration, viewed from above, of a woman cradling an ear of corn in one palm, having pulled back the husk with the other, to reveal the kernels. This illustration, and some of the book’s others, include fragments of newspaper articles collaged in, a mixed media effect. In this picture, there is a scrap of newspaper with the word “heal” in bigger, bold print carefully placed alongside the woman’s arm like a gentle reminder. According to Dictionary.com, “Mija” is a “colloquial contraction of the Spanish words mi (my) and hija (daughter)…widely used as a familiar form of direct address.”

I also appreciated the way a few Spanish words are sprinkled throughout the English verses, in italics—so that I began to learn some Spanish words. The phrase, the endearment, Mija, (my daughter) repeats throughout the book, creating such a sense of connection, intimacy, and tenderness. It also serves as a touchstone, a reminder of who is telling the story to whom, of where they are, and why she is telling this story.

The mother is sharing with her daughter the same stories her mother, the girl’s abuela (grandmother) told the mother when she was young, “so I would know who I was, / and not fall in with the glue huffers / who lose themselves in fumes…” The mother describes the beauty of their homeland, Honduras, where their ancestors lived in the forest amid bright-colored tropical birds:

where quetzal and cotinga sing,

near rivers and streams that leap free.

The mother wants her daughter to know about her heritage, because the daughter was raised in the city:

…among the concrete and zinc

or heard monkeys howl and hoot,

or felt the swoop of a bat’s wings

Her ancestors used to live in mountain villages where they grew corn (maiz) with beans (frijoles) and tomatoes (tomates), before climate change resulted in “failed crops, late frosts, …floods.” She talks of the endless wars, gangs, and the drug cartel, but she wants the daughter to know that there’s beauty also:

When you were a chichi, artists took over

crumbling under the weight

of all the violence those walls

and butterflies on stilts partied

in the prison quad.

You left a handprint in purple

and a handprint in yellow.

They turned the prints of the children

into a field of flowers.

What an evocative image–the prison crumbling because of the weight of all the violence they witnessed juxtaposed with the gorgeous illustration of the children’s handprints depicted as blooming flowers, echoing the image I referred to on the book’s dedication page.

The mother is trying to explain to her daughter why they are fleeing their homeland, undertaking such a dangerous journey. She reveals the following:

lost, swallowed by the hungry

belly of the earth. And hunger,

a different hunger, has led us

here, a hunger for peace, for justice.

She goes on to tell her daughter that the quetzal and the scarlet macaw are protected by laws, and declares that she, the daughter, mija, is “more precious than they.” These lines very effectively suggest the sad reality that there are no laws protecting either the girl or the mother, or at least they are not enforced. That’s why the mother’s chosen to accompany the people of various ethnicities to travel north. “Together,” she says, “we’ve crossed rivers, / mountains, cities, and borders.”

At the book’s end, which circles back to the beginning, they are waiting at the border between Mexico and the U.S., what she describes as “this arid land of rattlers and coyotes.” The accompanying watercolor on the page opposite these lines shows a group of small seated children, one who holds a teddy bear, with a small backpack decorated with the face of a cat. She is staring out as us with a searching expression that reminds me of countless haunting photos of children held in cages on our border with Mexico.

The mother tells her daughter:

Precious things are worth

They are worth hunger and risk.

These lines suggest they have encountered dangers and not having enough food. I can just hear the mother trying desperately to convey to her daughter, and perhaps herself, the necessity of their journey, to make her daughter understand that she would not have subjected her to these things unless it was absolutely necessary. She goes on to say the following lines which end the book:

And treasures, mija, are worth

dying for, if that means those treasures

are given the chance to live.

Mija, we are a people who find

a way, a people who survive.

Mija, we are people of the corn.

On the page opposite the above lines is a wonderful illustration of the caravan of people heading for the US border overlaid by an illustration of the mother and daughter having arrived at the border, the mother holding her daughter, arms wrapped tight around her. The two are surrounded by a frame made of corn on the stalks, perfectly ending this picture book with the words and the image with which the book began.

The book’s title, Under the Ocelot Sun, references a Nahua creation myth of The Five Suns, the first of which is the time when the gods release ocelots (jaguars) to destroy the earth so it can be born anew.

I also appreciated that, as is noted in the book’s front material, “a portion of the profits received from the sale of this book will go to support the work of El Futuro, elfuturo-nc.org,” which its website states is “a nonprofit outpatient clinic that provides comprehensive mental health services for Latino families in a bilingual environment of healing and hope.”

Telling this timely, compelling, memorable story through lyrical language and lovely illustrations emphasizes the harshness of the truths at the core of Under the Ocelot Sun, while allowing the beauty and resilience of its characters to filter through.

To learn more about Under the Ocelot Sun, and see some of the book’s exquisite artwork, visit the following:

Under the Ocelot Sun: The Making of an Illustrated Book